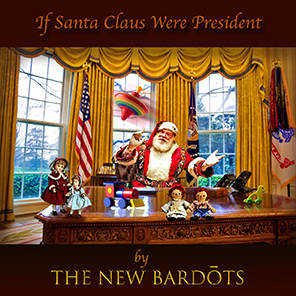 If Santa Claus were President. Christmas song by The NEW Bardots

If Santa Claus Were President

A new Christmas song by the New Jersey based rock group The NEW Bardots is right on time due to the current status of the 2020 Presidential election.

Ask the question: If Santa Claus Were President? A fun, out of the box perspective on a age old question.

The band decided to write a Holiday ditty they could call their own.  According to vocalist and frontman Wayne O “I came up with the Santa Claus for president concept because the election was coming up but I had no idea it would be dragging out so long that it really made the song super relevant (in a funny kind of way) so we got in the studio asap and finished it within a week”.

With a lyrics-video already produced, If Santa Claus Were President is just in time for the election results and a fun, put a smile on your face trip down 1600 Pennsylvania Ave for Christmas.
On YouTube: https://youtu.be/uxYz8YOEivk On Spotify: https://open.spotify.com/album/1xH6xWvEuiJA1sRJq3OUnH?si=PRU0R9vqQWeXovUb5f0sNQ